Although The British Shorthair is the oldest British cat breed, it gained recognition in the US only in the late twentieth century. Nowadays, its calm nature and its unique round “teddy bear” look make him a popular pet, as well as a sought after show cat.

The British Shorthair is said to have originated from the common domestic cat of ancient Rome, and are believed to have been brought with the Romans when they invaded and ruled England two thousand years ago. Throughout the years, these cats bred among themselves in the relatively
secluded island – possibly cross-breeding with local wild cats. During the nineteenth century, the interest in pedigreed cats flourished in Victorian Britain. As exotic cats from the far and nearorient arrived, some breeders decided to recreate the local British Shorthair as a pedigree in its own right. In 1871, British Shorthairs were shown as a breed in the Crystal Palace cat show.

With the development of the new cat breeds, interest in the British Shorthair declined, but the breed’s revival after the Second World  ar encouraged British breeders to make improvements by cross-breeding with Persian cats. This enhanced the round thickset look of the British Shorthair.

In 1980, after some debate, the major American cat associations recognized the British Shorthair. Today there are still differences between British and American definitions of this breed. 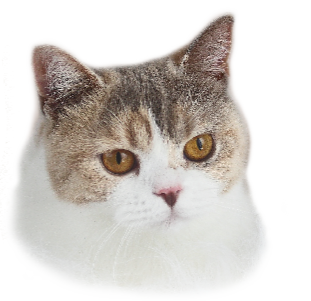 The British Shorthair has a broad and massive body with strong legs, round paws, and a thick, round-tipped tail. The head is round with pronounced whisker pads. The eyes are round and open, and the ears are round and well set apart. The overall look is a round, massive, smiling, “teddy bear” cat.

The coat of the British Shorthair is short but very dense. Its texture is not particularly soft, but is  mooth and carpet-like. Originally, pedigreed British Shorthairs had blue coats – in fact, the breed was once called the British Blue. Today many colors and patterns are acceptable, but most associations still do not recognize the British Colorpoint Blue.

The British Shorthair is an easy-to-maintain breed. The short coat needs only a brushing once or twice a week to remove dead hair. Occasional bathing helps to remove excess oil from the coat. 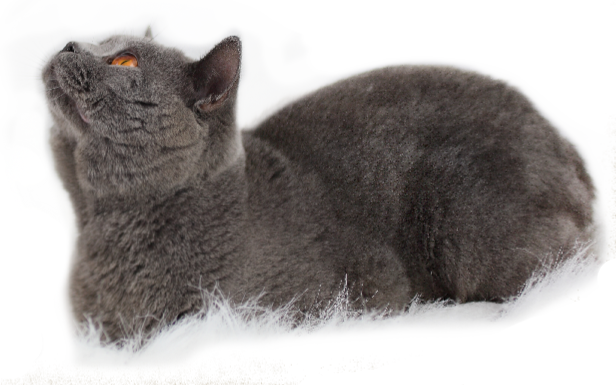